This weekend it started. My viewer fell apart. Really it did!

For years I have been exclusively using the official LL Viewer and I really, really like it. So. Saturday night I was getting dressed to go to Elysion’s party and put on a new outfit I bought. Looked good and I was happy with it.
I went to the kitchen to get me a coffee and when I returned to my pc I saw my avatar naked, no clothes. Huh? Checked the outfit, indeed: not wearing anything.
So I put on the outfit again and looked good again! I didnt give it much thought and TP’ed to Elysion, where I arrived naked! Could be a loading/rezzing thing, so I waited a while but it took longer than I am used to and upon checking my outfit and ‘wearing tab’…all my clothes were gone again! Wtf?

TP’ed home and got dressed AGAIN and this time I waited and looked at myself for a bit. And I saw it happening: one by one, without me touching the keyboard, I saw my clothes and attachments disappear from my avatar, one by one.
HUH?!

I relogged. Came back, naked, and this time the new outfit was gone from inventory. Sigh. I hate missing inventory!
So, I cleared cache and relogged, this time into Pooley region, as to load inventory after the clearing cache. Usually that takes up a few minutes, although I don’t do this often. Indeed, within 10 mins my avatar appeared, still naked, but just half of my inventory and all outfits were empty.
Meh. I put on some jeans and a shirt and TP’d home, and upon arrival: naked again!

I logged off. This time rebooted the PC AND the router/modem (switched off the modem for a while) and when I came back inworld the drama was complete: NO avatar, NO inventory, NO Landmarks. Nothing. Nada.

Long story short, then did all the steps LL advises on inventory loss and cases like this. ALL the steps. TWICE. I even went as far as to uninstall the viewer, removed ALL files, cookies and other stuff while I was at it, cleaned up harddrive and whatnot (as a clean install) and downloaded the viewer again from the downloadpage.
I logged in and. Nothing. Same empty inventory, no avatar. I was seriously getting grumpy by now and so, for the first time in years I downloaded another viewer to see if that would give the same issues.
I got the SIngularity viewer (never tried that one before, but read good things about it) and tadaaaaa: perfect. My complete inventory was there, my lovely avatar all dressed up and smiling at me!
So I tried LL Viewer again, to see if logging in with the TPV had triggered something, but. No. Meh. And booohooo.

I continued my weekend online in the SIngularity viewer, which runs fast and I could take pics, but in all honesty I do not like it at all, because: it looks like the UI of 2007. Pie menu and all (which I found out how to change into the ‘normal’ menu, no outfit tab and I am so used to the LL Viewer that I felt all weird in this oldskool one. It is not a bad viewer at all, don’t get me wrong, I just cannot handle the old look very well.

Meanwhile I filed a support ticket at LL for help, I have a premium account so that was easy, and continued.

The first reply I got from a Scout was the obvious default response: a list with all the steps I had already done…and also they kept insisting I gave the name of ‘the object’ that was missing…..well: HOW ABOUT MY WHOLE INVENTORY?!! (for the record I had attached screenshots to my ticket, showing the emptiness – similar the one I posted in this blogpost, but with full UI showing…).
Another reply told me my case was being handed over to an engineer. So I will wait. 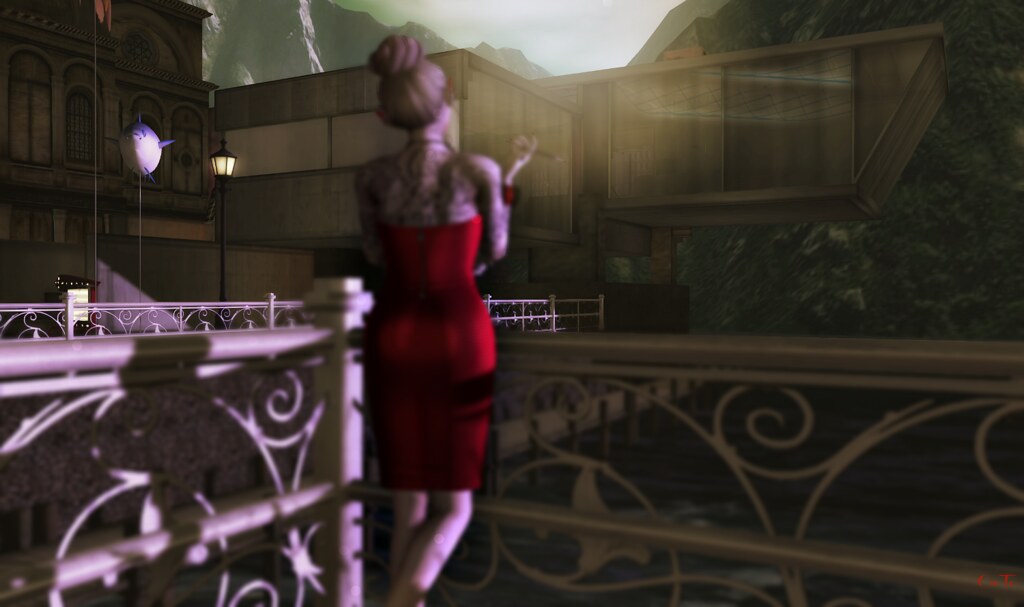 Last night I went to Bar Moderna, where Becky played nice music as she always does on Mondaynights, and told her I was suffering in Singularity. She advised me, while I am awaiting the fix of my beloved LL Viewer, to try the Alchemy viewer, which has the look and feel of LL. I did and….yesss, I like this better. OK, it is not the LL one..but close enough for now.
(Note: no, I cannot use Firestorm…I really cannot. It crashes the moment I hit the snapshot button – in best case just a crash but too often a complete Blue Screen of Death, I do not know why, but I have given up on FS years ago).

All this somehow affects my SL in a way that I didn’t feel like exploring much, let alone take pics and blog. I am sure all will be fine soon, or someday!