‘Twas the night before Christmas, on a sim far away
Santa Coober was in a hurry, with his four Elfs in his sleigh
Fighting lag and simborders, through snow and through ice
Delivering presents, to all who had been nice 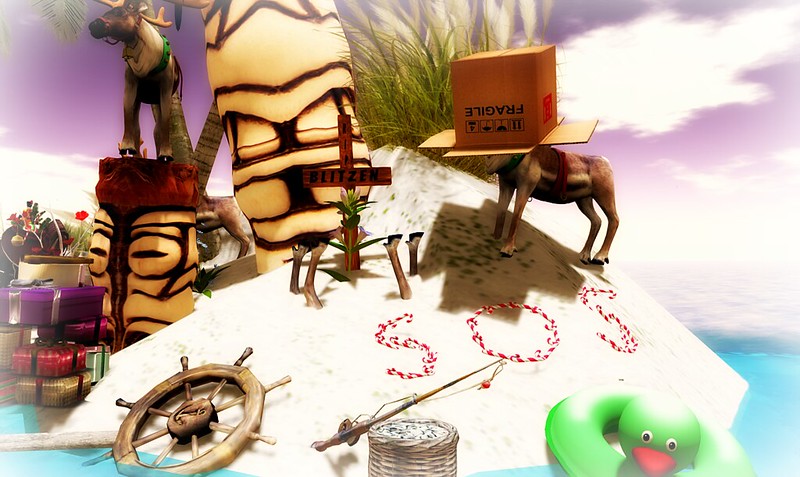 Santa Coober, he was tired, but just one continent to go
He was so looking forward, to a holiday without snow
His eyes getting heavy, he could really need some rest,
A short nap was what he wanted, it would be for the best

Trusting his Elfs would take over and lead the reindeer the way,
if only he had known they were all AFK!
The Reindeer soon noticed that something was not right
They tried to keep up, but for that task they were too light 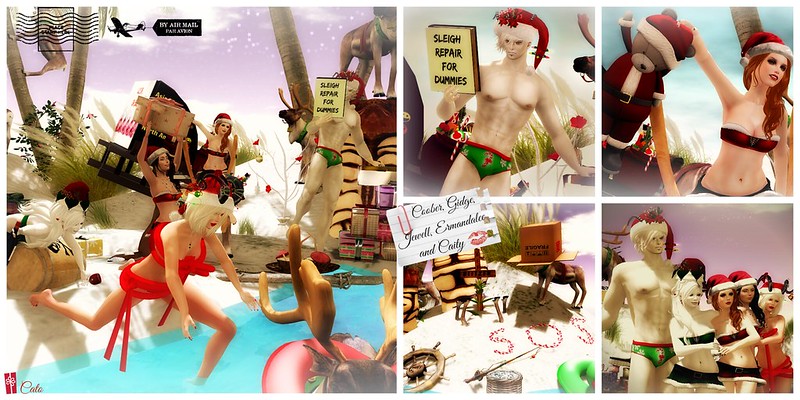 A big bang, was what happened on a small piece of land
Presents scattered around an island, on an unknown continent
The four Elfs woke up and saw with some disbelief
Poor Blitzen had not survived, it filled them with grief 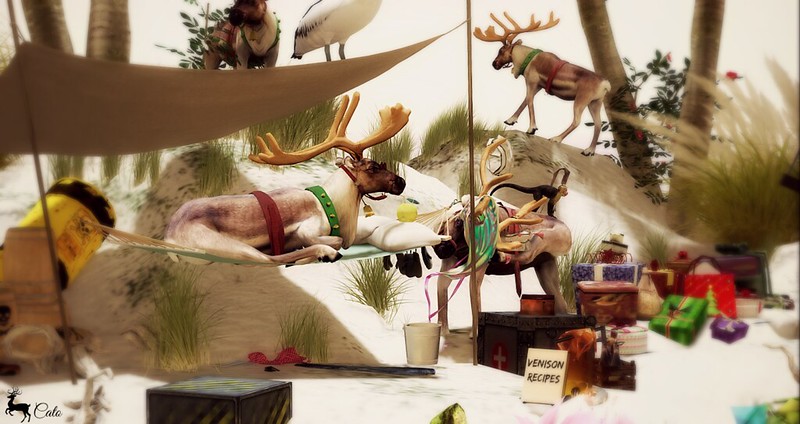 It was sunny and warm, and soon they felt pretty good,
Elf Ermandalee opened the presents, and found them some food
A Reindeer got stuck in the sea, the poor dear
Elf Jewell threw him a lilo and tried to get him near

Elf Caity took care of rum and also some wine, she had found in the sand
While Elf Gidge was being silly, things were getting out of hand
Santa Coober was reading the book on some Sleigh repair
The Elfs chatted cheerfully about  new releases of mesh- hair

As time went by,  and help had yet to arrive
Santa and his Elfs luckily managed to survive
An SOS sign made of candy would surely be seen
By a plane or a boat or anything in between!

Don’t be afraid, said Santa Coober, we are all okay
The presents will be delivered, tho with some delay
The Elfs laughed and danced, being happy and didn’t worry
Help will come for us, but please…no need to hurry!’

Merry Christmas to all!

Credits and need-to-knows:
* No animals were harmed in the production of this story
* 763 prims were used, 1134 coconuts, 78 bottles of wine, 3 barrels of rum, 13K Linden Dollars spent on hairstyles and make-up for the Elfs, two nervous breakdowns by Santa Coober, 131 notecards were written and sent to keep the team spirit alive, 4 bottles of sun tan lotion were needed
* The production took over 4 weeks to prepare, including dress rehearsals, sleepless nights and several crashes (not meaning the sleigh)

Special thanks go to my lovely neighbour on mainland, Tek Karfield, who generously allowed us to overlap and rez prims on his land for the whole time we were working on this project! Tek, you rock!