Clubs in Second Life, they have always been there for as long as I am a resident. And I suppose they will always be there for as long as Second Life exists. I love to go to clubs, for the music, the dancing and meeting people. Well or just dance and listen to the tunes, while I am browsing the internet, when I don’t feel particularly social – but I am convinced I’m not the only one doing that. Right?

Recently DJ Lake (laketower.resident) opened her own club ‘Buzz‘ and, luckily for me, she found some time in her busy schedule as new club owner to have a short interview about what motivates her to start this new adventure!

So, Lake..tell us a bit more about yourself!
‘I’ve been in SL for almost three years now. I think for the first year all I really did was explore random sims, try my hand at a bit of Second Life photography and hang out for hours at a time in Toby’s Juke Joint, sitting in a quiet corner enjoying the music and chat. Even back then I did like the idea of DJ’ing in Second Life, because music is a real passion of mine. But back then I didn’t have the software and also, I thought it seemed too complicated.’

Why did you start your own Club? Are you the only owner?
‘It was a total accident. I only quite recently discovered my love for building and creating nice spaces in Second Life.
What is now the club was just me playing around for fun, at best I thought I may hold the occasional private party for friends.
But then I fell in love with it so much I wanted to share. My friend Ylva (soulfullife.resident) was a big part in encouraging me, that it was worthwhile opening it as a club – nothing ventured, nothing gained!
And this way I get to play exactly the music I want. In my mind, Ylva is as good as being the joint owner – just don’t let her know that!
In all seriousness though, Buzz would not exist without Ylva. So any success the place enjoys is hers too.’

Why the name Buzz? What’s the story?
‘I considered a lot of different options, I settled on ‘Buzz’ because in one word it seemed to best convey what a club in Second Life (or any social place in Second Life or Real Life for that matter) should be about – energy.
Music is all about the energy – that ‘buzz’ you get when a song gets inside your soul.
A club is, of course, also about the buzz of people; friends catching up, strangers meeting new friends, like-minded people enjoying the same interest in music for a little while. The Hornet logo was the perfect opportunity for me to slightly subvert that, and give a slightly darker edge. Somewhat accidentally, ‘Buzz’ ties in nicely with the back story of the club being housed in an old Hydro Power Station, with the buzz of the turbines and generators.’

What sort of music can visitors expect?
‘Well, personally I have a very eclectic taste in music – something you hear a lot, but genuinely I listen to all sorts.
However, we are primarily an Indie and Rock club. Those are my true loves in terms of music genres; bands such as Royal Blood, Muse, Placebo, Black Keys. But there are so many – way too many – sub-genres these days it’s hard to tie it down. For my sets I do tend to keep it the mood upbeat, nothing too dark and depressing!’

Are you the only DJ?
‘At the moment it’s just the two of us, Ylva and I, sharing the duties.’

What nights are the events?
‘For now, we are doing events once a week on Mondays for 3 hours. We know it’s going to be a lot of hard work to get a good regular crowd, so rather than spread things thin, we’re combining on Mondays to do 3 hours of music.
I’ve nothing set in stone beyond that, both of us are doing this for the love of sharing our music, so even a handful of people every week is enough to make it worth while.’

What kinds of events are you planning to have in Buzz?
‘In contrast to the music, I’d love to do some spoken word nights, where we have some guest readers doing either extracts from books or poetry. I’ve been to a few such nights and they are a lot of fun and a refreshing change from DJ events.

I’m also in the early stages of planning some sort of combined wrestling and music event! watch this space! I have lots of other ideas too. There is so much more out there in SL to do, other than clubs, but it’s easy to forget that. I’d like to find different ways of combining the smaller or more niche activities with music.’
Do you have a club group people can join? If so, is there a group fee?
‘Yes, people can find a link to the Buzz group in my profile or at the club – no fee.’
Is there a Flickr group for Buzz?
‘Not at the moment. For now I’m posting Buzz promos on my personal Flickr but in time I’m sure I’ll give Buzz its own space!’

Can the venue be hired for private parties/events?
‘Yes, absolutely! If you want me to do the DJ’ing, the venue is yours for free and I’ll just play for tips. It’s an awesome place for all kinds of events.’
And finally…Is there something you would like people to know?
‘I’d like people to know that the drugs up on the top floor are nothing to do with me!’

Thank you so much Lake, for your time and answers to my interrogation! 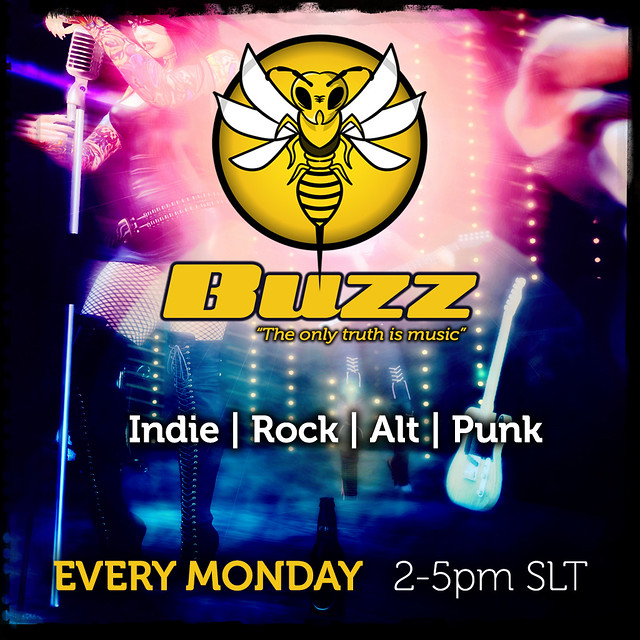