Coming Saturday, 1 November, a new exciting hunt by MadPea Games will start. Now, I am not into hunts – never made a secret of that – but the MadPea hunts are something else and the only ones I have always enjoyed so much. I have fond memories of solving the mysteries of  the Room 326 hunt, together with Tem over a year ago (maybe 2 years?), we used to dress up as detectives and had so much fun!

The new hunt is called ‘ Blood Letters’  and it is of an Adult nature, which is something new for MadPea! It will work, as usual, with a HUD and you are supposed to solve mysteries and murders, for which you have 25 days.
The rewards are awesome prizes along the way, from SL’s finest designers (a full list of creators is to be found on the MadPea official website). The previous hunts I did for the sheer fun of it, the story line makes it worth doing without going for prizes, but they are a very welcome extra of course, well..or a reason :).

From the official press release:
‘Kiana Writer, CEO and Founder of MadPea said of Blood Letters “ It’s the most twisted storyline I’ve ever written combined with clever puzzles and will give the players a glimpse of what’s coming soon with UNIA.”

So, I was so lucky as to get some previews of the prizes offered..and had some fun with my friend Gidge (Gidgette.Adagio, see her flickr, she makes awesome pics!), with a pose from Rack! called ‘Fine Dining’. I have to explain I did edit the pose slightly, as it is made for a man and woman, with the man with his face somewhat lower than I positioned Gidge..haha, and also, I didn’t really get in the dining aspect but had the idea of portraying the Devil, seducing poor Gidge with some fine wine…hence the title and lyrics at the start of this blogpost. 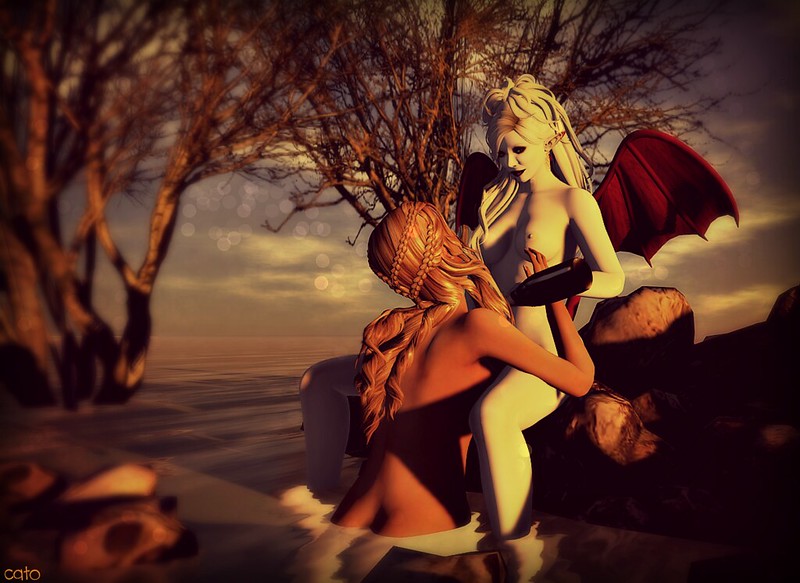